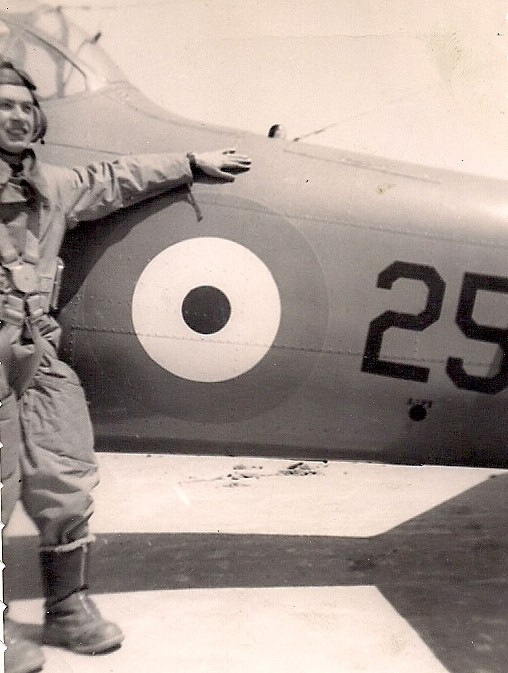 Yesterday I have added a few more coats on the Harvard and I think I have added enough even if enough never seems enough. 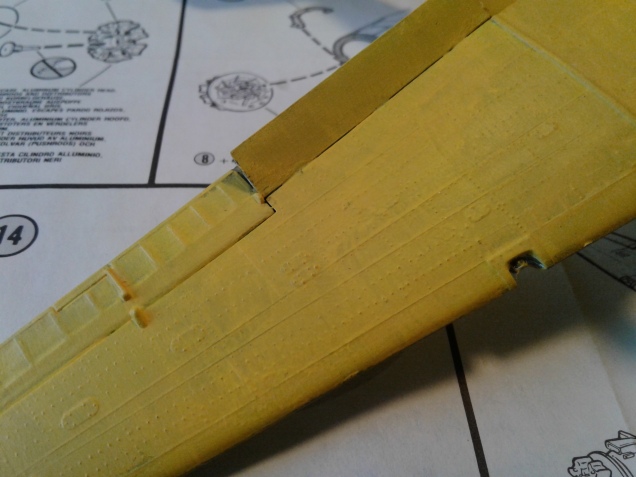 I have learned my lesson with using black as a primer coat. I will now concentrate more on the homemade decals with this reference found on the Internet since I can’t use U.S. Airforce decals. 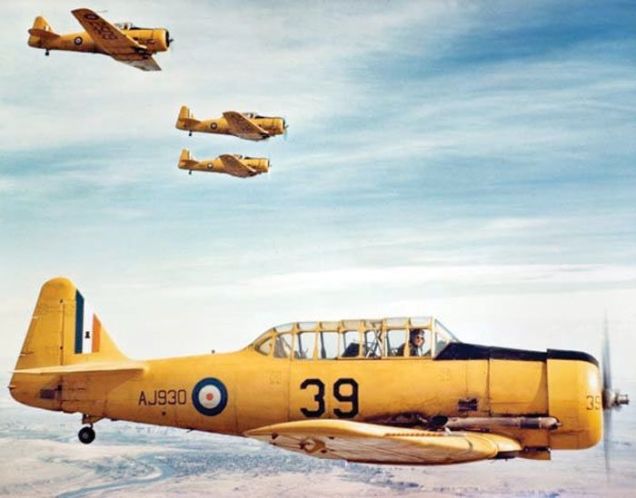 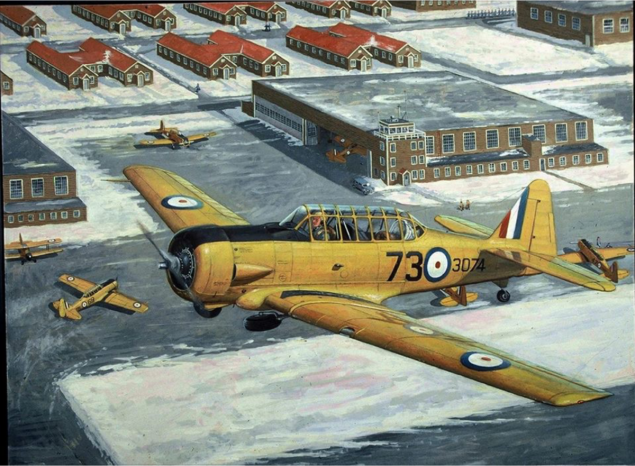 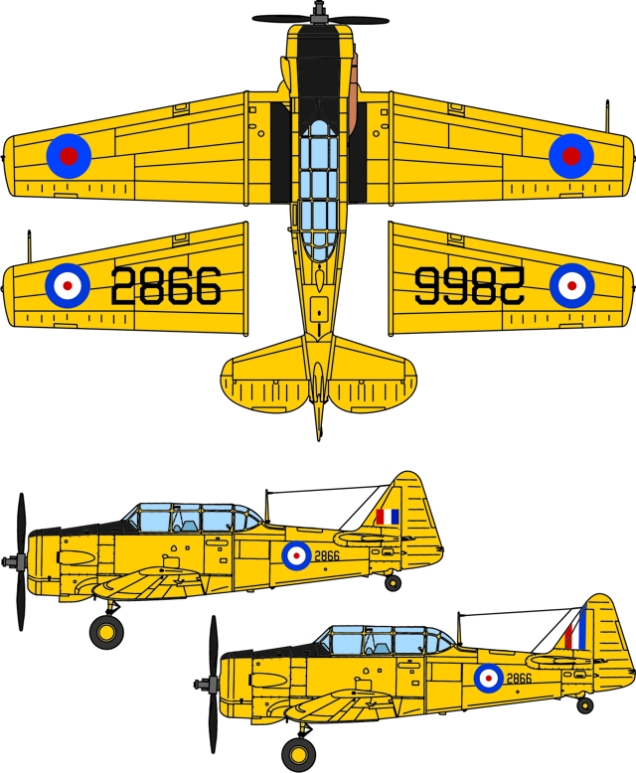 I have been working steadily on the AT-6 (Harvard), but this was nagging me… 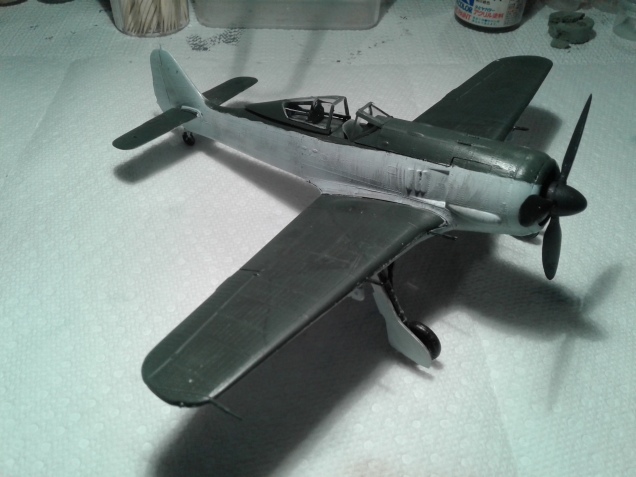 How can I finish up my Monogram FW 190 since the decals were unusable? Could I use leftover clear decal sheets I had bought a few years ago? I know I can’t use clear aerosol decal fixative spray outdoors in winter?

Necessity is the mother of invention.

I had a few options. To buy overpriced aftermarket decals… To buy another Monogram FW 190 just for the decals… but they could be unusable also… To buy Tamiya FW 190 and use the decals, but get struck with another unbuilt model kit without decals…

Last week necessity had to kick in. I decided then to copy a decal sheet found in this model kit on my color inkjet printer … 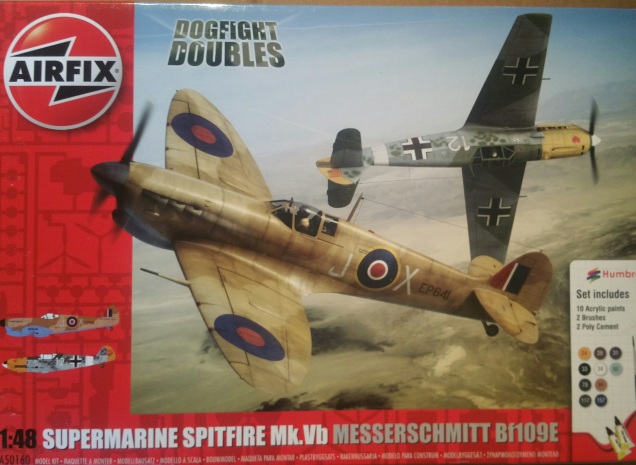 I then used a large brush to put four thin coats of clear acrylic paint over the copied decal sheet letting each coat dry for at least 24 hours. I then painted a white undercoat where the decals would go since there is not white background.

How did it go?

When Fred Turner’s son sent me a black and white photo of his father sitting in the cockpit of a Harvard, I just had to do this…

Fred Turner seen in the cockpit of a Harvard later became a Spitfire pilot with RCAF 403 Squadron. I just had to colorise that photo for his son who had shared photos of his father when he found my blog about RCAF 403 Squadron. 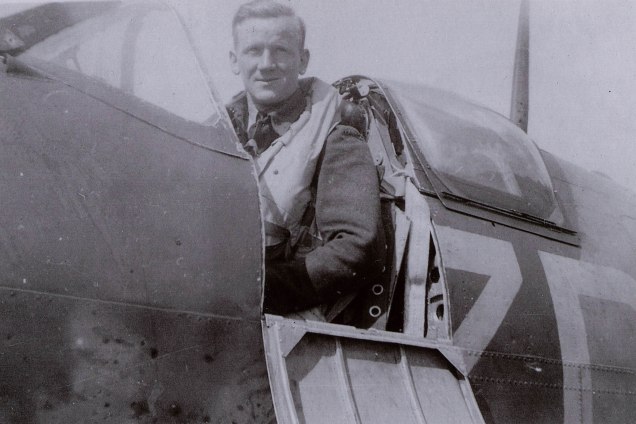 How I came to create a blog about RCAF 403 Squadron is a very, very, long story.

While I was researching information about Mosquito pilot Eugène Gagnon for the 83 year-old man who considered Eugène as his hero, I had decided I just had to create a blog about RAF 23 Squadron since I did not know anything about that squadron. This is how the daughter of Paul Beaudet, a Mosquito navigator with 23 Squadron, found it and wrote a comment about her father and his pilot George Stewart.

Both had done 50 operations together.

She gave me George Stewart’s contact information so I just had to write him.

This is how I got to know George Stewart who phoned me twice, and lo and behold invited me to go visit him in Hamilton. I just had to go to Hamilton with my wife to see George (he insisted I had to call him George). We decided to stay over at a B&B (my wife loves staying at B&Bs). When I told the owner I was visiting a Mosquito pilot here in Hamilton, he told that me his father-in-law Walter Neil Dove was a Spitfire pilot and that his son Greg had all of his grandfather’s photo albums and log books. 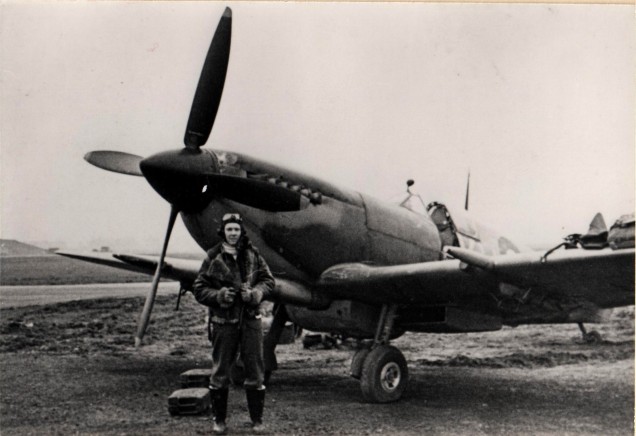 He asked me if I was interested in meeting his son…

I just had to meet his son…

When I met Greg and I saw all he had, I told him that we had to create a blog about RCAF 403 Squadron since I did not know a single thing about that squadron and I would have to document what he had.

This is one photo I could related on something I knew…

So I got to work even if I made some mistake with identifying some pilots at first. 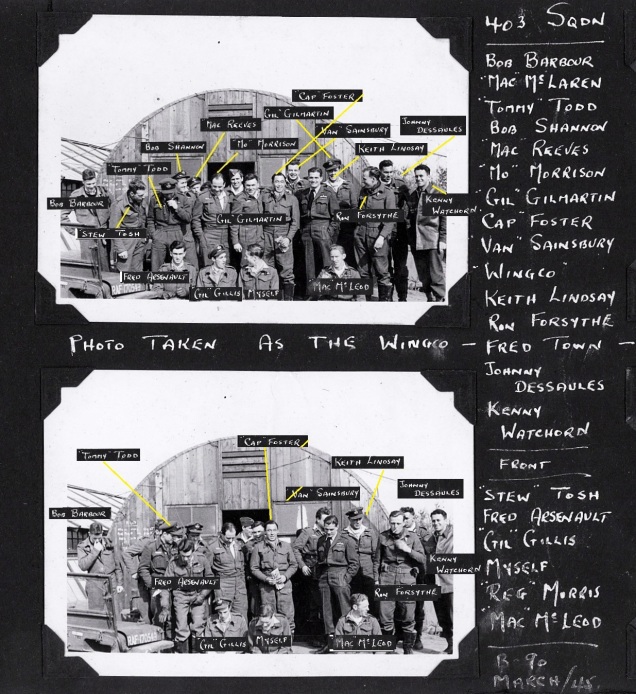 Writing more and more about that squadron is how Fred Turner’s son found that blog and shared the Harvard picture.

Last month Charles Robertson Olmsted’s nephew also found that blog. Seeing this group photo I had once colorised he quicky identified his uncle. First row, first pilot on the right.

Charles Robertson Olmsted flew some 100 operations before being sent back to Canada because he could not fly anymore above 20,000 feet with an enlarged spleen that was not diagnosed. Charles became an instructor with No. 1 O.T.U. Bagotville, in Quebec.

On May 1, 1944, Charles Robertson Olmsted died in a plane crash which was flown by John Riley Milne. 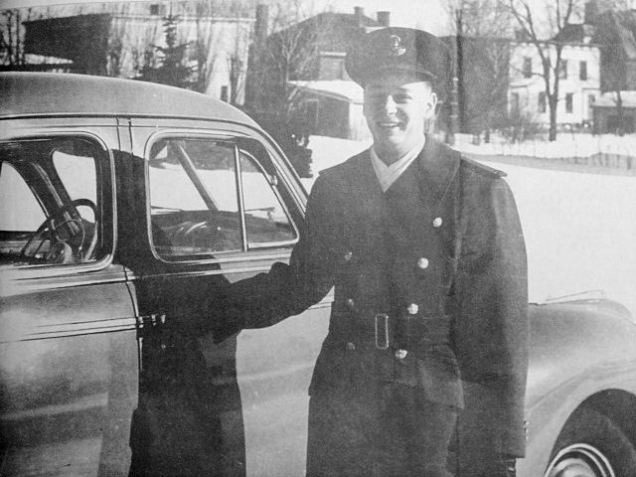 Photo of John Riley Milne – This photograph and an accompanying article appeared in The Globe And Mail newspaper on Tuesday, 11 November 2003. The touching article, called “He was the world to someone”, was written by Jonathan Vance. Circa 1973, when he was a young boy, Vance found this unidentified photograph in the bottom of a box of old books at a church rummage sale; he paid $0.10 for it. Subsequently, a letter to the editor appeared in the same newspaper identifying the young airman in the picture as being John Riley Milne. It was from his sister, Joan (Milne) Brett who was living in Morris Island, Nova Scotia, at that time. She wrote that her brother had been flying a Hurricane in a low-level training exercise in Bagotville, Quebec, when he had been killed.

It does not matter if John Riley Milne was not flying a Hurricane on May 1, 1944 but a Harvard with Charles as a navigation instructor. What matters is that the plane most probably took off without enough fuel in on the left wing tank, and this fact seems to have been somewhat not investigated further in 1944.

This photo is most probably taken at No.2 SFTS Uplands, Ontario.

Don’t ask how I know because the explanation could be quite long. 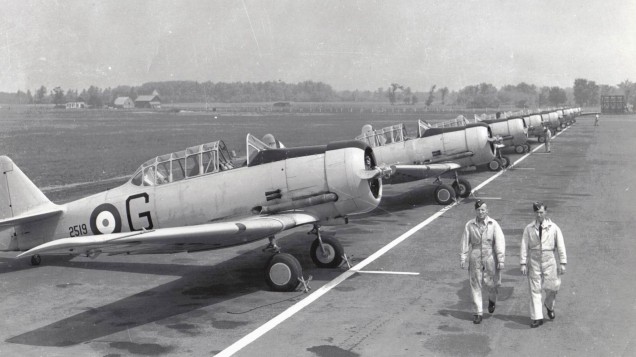 Most of Allied WWII pilots trained on the North American AT-6 (Harvard in the RCAF). The Harvard is somewhat special in my stash even if I bought it more than 20 years ago.

I could make you believe I own one, but I can’t tell a lie on my blogs…

My fascination for aviation started in 1958. Writing blogs about WWII started with writing about a ship, a Canadian destroyer which I knew nothing about before my wife’s uncle told us in a family reunion in July 2009 that he was a stoker aboard HMCS Athabaskan. I just had to write about it since my wife’s uncle did not want to tell us more. Little by little I wrote about HMCS Athabaskan both in the two Canadian official languages, French and English.

I don’t monetise my blogs. There is something more precious in life like people who read my blogs and sometimes comment on what I wrote. The first WWII veteran who wrote a comment on a blog was a rear gunner with 425 Alouette Squadron. Curiously for someone who thought he knew a lot about WWII, I knew nothing about 425 Alouette Squadron the only French-Canadian RCAF squadron who flew Vickers Wellingtons and then Handley-Page Halifaxes. Through this veteran I met a man whose hero when he was young was a Mosquito pilot who history had forgotten.

His name was Eugène Gagnon the trainee seen here in front of a Harvard.

My research led me to find all about Eugène Gagnon and his days of training first on a Fleet Finch, then on a Harvard in Dunnville, Ontario where he earned his wings.

Eugène became a staff pilot in Paulson, Manitoba before he was sent overseas. In December 1944 he became a part of RAF 23 Squadron flying de Havilland Mosquito Mk VI. From December 1944 to May 1945 Flight Lieutenant Eugène Gagnon flew 33 operations most of them in the dark of night, in all-weather conditions, and often around German airfields stalking German nighfighters.

Night bandits they were called…

But I am digressing.

I have just added four scans of the instruction sheet for the North American AT-6 Texan which will be the basis for building a Harvard which crashed on May 1, 1944. 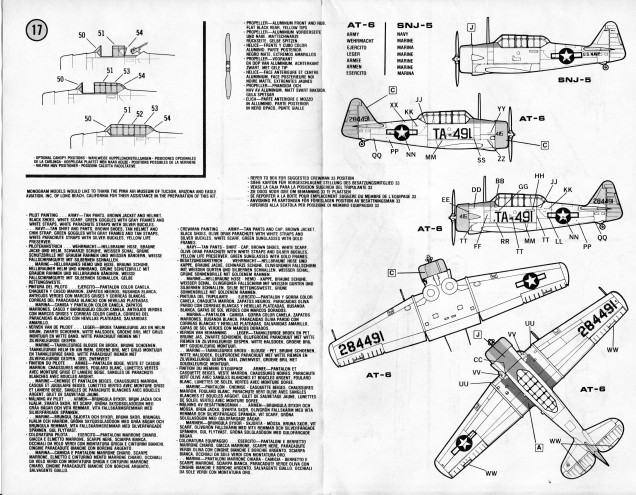 The story behind this photo shared by the nephew of Eugene Gagnon who later was a Mosquito pilot with RAF 23 Squadron, has been well documented on another blog I created in 2010.

But there is another story behind Eugene Gagnon’s story…

I am almost there adding all the decals.

All the Me 109 decals have been added and went surprising well. The pitot tube was replaced with one in the spare box. I told my son about the camouflage not been realistic for the time period, but my son did not mind.

I forgot to file the bottom of the cockpit armour plate before glueing it. You can see it.

The decals on the Stuka have been added. I still need to paint the 37mm cannons to finish it for my brother’s birthday next week. 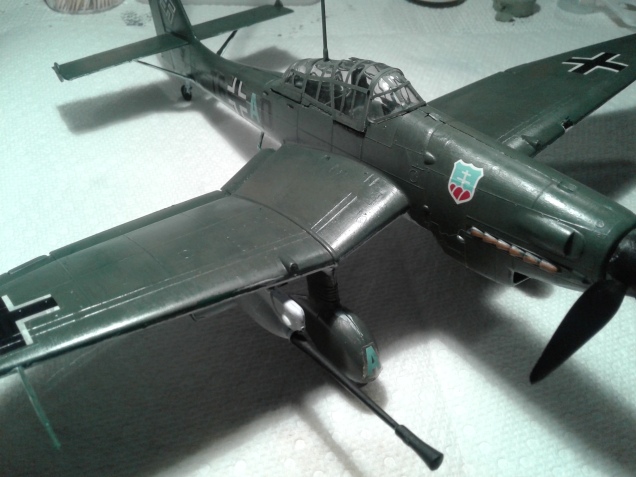 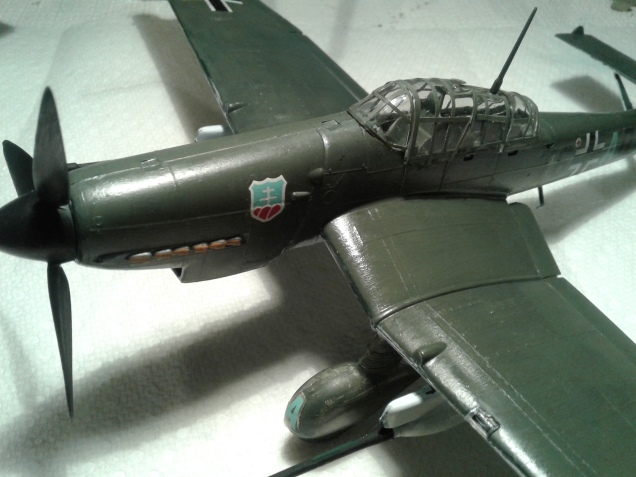 What about the decals for the FW 190?

I got a reply from Revell in Germany. They are not available anymore which is not surprising.

I was tempted to buy another FW 190 on Amazon.ca but only for the decals since the decals which are available online are in my own humble opinion overpriced.

Amazon.ca had two good deals, but when I took a look at my stash, I decided not to add more since it is still growing now that I have received my Tamiya 1/48 scale Me 262.

I will probably scan some decals and make replacement ones for the FW 190.

The Do 335 had been finally completed. The camouflage seen under more light looks better but is not perfect. 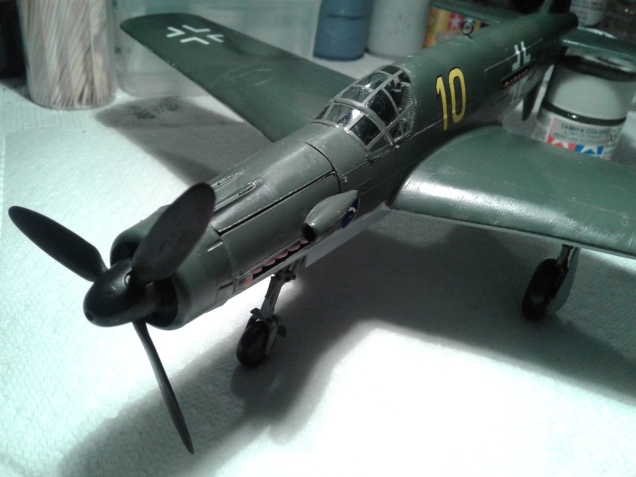 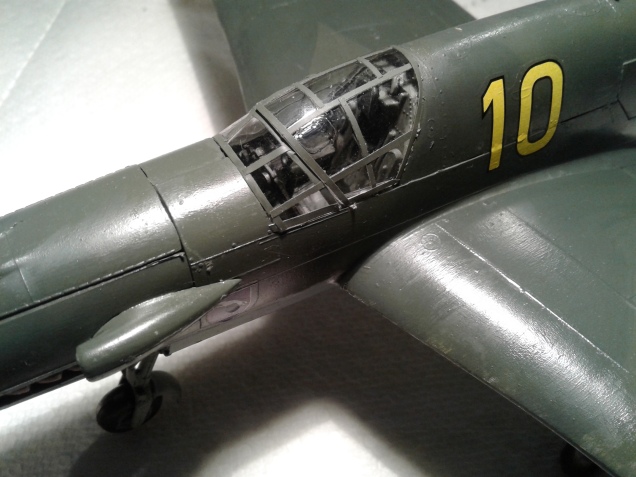 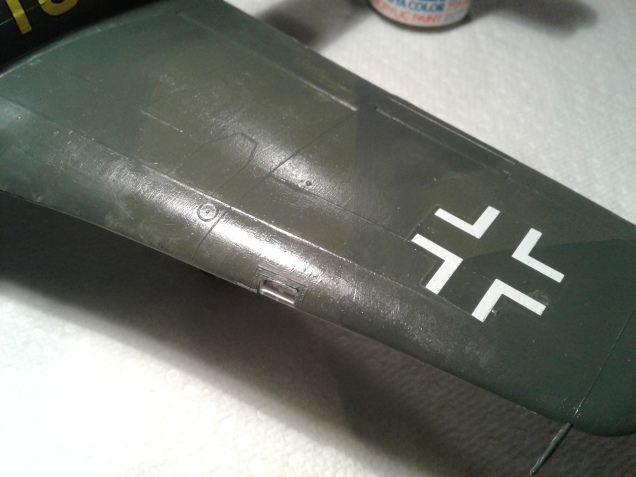 Some decals were finally added.

The Me 109 decals went surprising well although I managed to break the pitot tube.

I know the camouflage is not realistic for the time period, but my son won’t know the difference.

The decals also went well with the Stuka.

The decals for the FW 190 was another matter.

As soon as I put them into water they began to curl up. I decided to write Revell for replacement decals sending them a photo and the instructions as proof of purchase.

The Do 335 is still waiting for its decals.

As you can see the camouflage is not perfect. The black green is not black enough even if I tried to fix it twice.

All four model kits are waiting for decals. I don’t know what to expect from 20 to 30 year-old decals. We should find that out tomorrow since an acrylic clear coat was applied this morning with a painbrush. 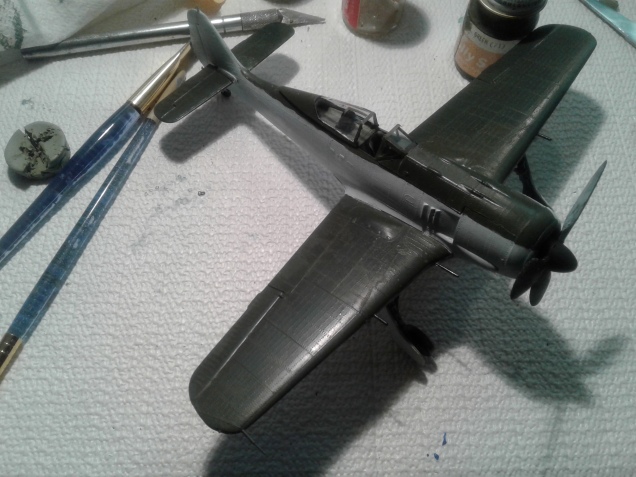 While I’m at it, why not add another build while I am waiting to put a finishing touch on these…? 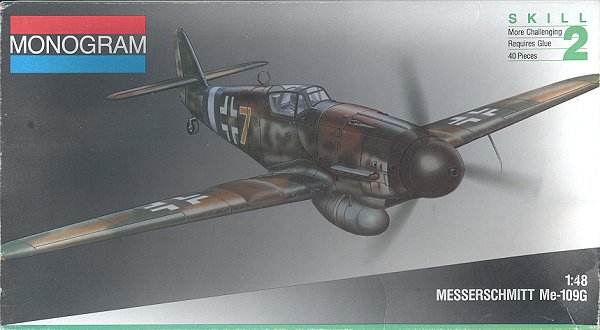 Last year my youngest son asked me to build him a Me 109 for Christmas. I had already one built when he was a young child back in the 1980s.

I just could not wrap this one up…

So I have decided to build a new one which should be the last Me 109 I would ever build. 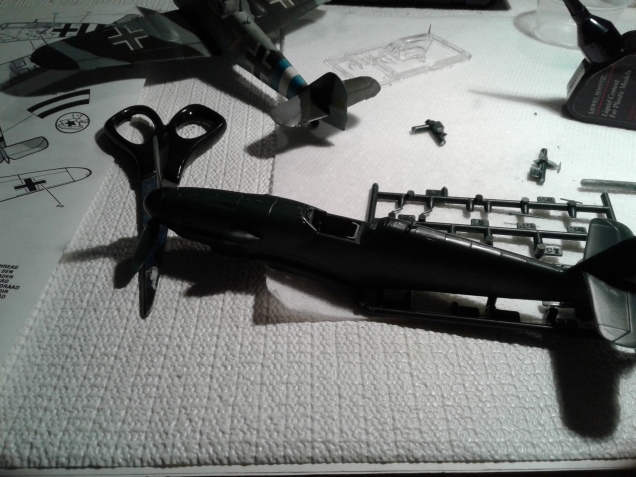 I cleaned up the workbench before moving on to the next step.

The wings were glued last Thursday and Friday.

I will try to remedy without having to use a filler.

Monogram chose to have the pitot tube molded with the lower left wing, which isn’t a great idea. This is why I am protecting it with masking tape to avoid snapping it off.

The Fw190 is still waiting to be painted as well as the Ju87G.

I have since glued the two propellers, the front and the main wheels and the stabilizer halves. I will work later on the landing struts.