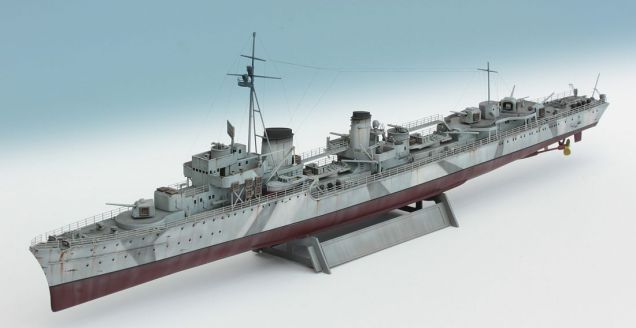 I wanted a companion ship to go along HMCS Huron which I will eventually convert to HMCS Athabaskan sunk on April 29, 1944 by Torpedoboat T-24 whose companion ship was Zerstorer Z-24. Since no model ship is available for building the T-24, building Z-30 should fill the bill sort of.

From knowing anything in 2009 about the Tribal class destroyers, and even less about HMCS Athabaskan G07 which was sunk on April 29, 1944, and even more less that my wife’s uncle was a stoker aboard the ship when it was torpedoed by T24 a torpedo boat of the German Navy…

This story has become more and more amazing by finally being able to build a replica of HMCS Athabaskan G07, and being in contact since January with the son of a sailor who was in the engine room aboard T24 when it sank the Athabaskan.

Believe it or not…

I should stop looking for inspiration… and stop going shopping on Amazon!

This will be the last one I will buy…

Previous to Airfix 1/600 scale Ark Royal, the last model ship I built was the 1/350 scale USS Missouri which I gave away since I was moving from my parents’ place. In fact most of my 50+ collection was given away to my students in my history class. The Tamiya USS Missouri was a large model almost three feet long if my memory is correct. Today you will have to reach deep in your pocket to buy another one.

Last week going on Amazon I found that Trumpeter had a 1/350 scale model of a Tribal class destroyer. I had always wanted to build a model of HMCS Athabaskan which was a sister ship along with the Haida.

HMCS Athabaskan is quite special since my wife’s uncle said in 2009 that he was a stoker aboard when she was torpedoed on April 29, 1944. I had never heard about HMCS Athabaskan before and no one in the family knew my wife’s uncle had been a sailor. I was curious and I started researching more about HMCS Athabaskan. My reasearch led me to create a blog about World War II dedicated to that ship and to my wife’s uncle who did not want to talk much about his ordeal. The few things he said were that he was writing a letter to his parents in the engine room. The next thing he remembered was being rescued by another ship.

It had to be HMCS Haida.

In 2011 I went to Hamilton and I visited HMCS Haida which is now a museum. I took more than 200 photos of the ship since I knew I would probably never go down to Hamilton again.

Finding there was a 1/350 scale model of a Tribal class destroyer rekindled my interest about building it although it is not the Athabaskan G07.

This is a PDF of the instructions I found on the Internet.

There is a photo-etched sheet with the kit. I will be the first time I will use photo-etched parts. I know they are not that easy to work with. We will see. My goal is to finish this project by April 29, 2019, 75 years after the sinking of HMCS Athabaskan G07.