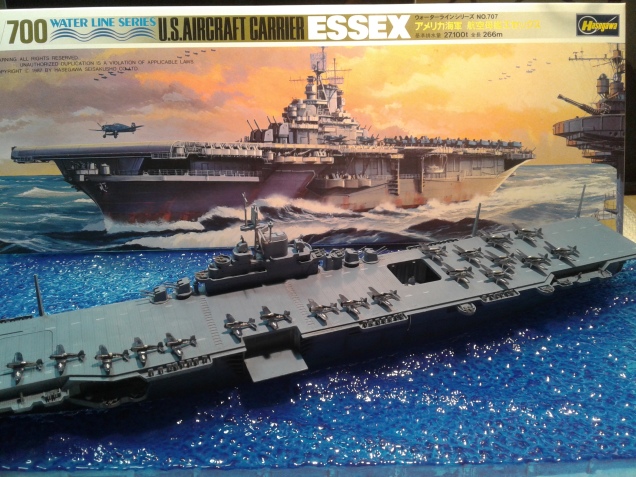 Almost two months since I finished painting the tiny planes…

Decalling is now in full progress…

My special interest with USS Wasp CV-7? Richard Harmer was a Lieutenant Junior Grade on USS Wasp from December 1941 to August 1942*.

Chick Harmer retired a Captain in 1961

Wasp lay at anchor on 7 December 1941, observing “holiday routine,” it being a Sunday. In the Pacific, the Japanese broke the Sunday morning peace in a devastating surprise attack on the U.S. Pacific Fleet at Pearl Harbor and nearby naval and military installations on Oahu. Their daring attack plunged the United States into World War II in both oceans. On 11 December, Germany and Italy followed Japan into war against the United States.

Meanwhile, U.S. naval authorities felt considerable anxiety that the Vichy French warships in the Caribbean and West Indies were prepared to make a breakout and attempt to get back to France. Accordingly, Wasp, light cruiser Brooklyn (CL-40), and two destroyers, Sterett (DD-407) and Wilson, departed Grassy Bay and headed for Martinique. Faulty intelligence gave American planners in Washington the impression that the Vichy French armed merchant cruiser Barfleur had gotten underway for sea. The French were accordingly warned that the auxiliary cruiser would be sunk or captured unless she returned to port and resumed her internment. As it turned out, Barfleur had not departed after all, but had remained in harbor. The tense situation at Martinique eventually dissipated, and the crisis abated.

With tensions in the West Indies lessened considerably, Wasp departed Grassy Bay and headed for Hampton Roads three days before Christmas of 1941, in company with the aircraft escort vessel Long Island (AVG-1), and escorted by Stack (DD-406) and Sterett. Two days later, the carrier moored at the Norfolk Navy Yard to commence an overhaul that would last into 1942.

After departing Norfolk on 14 January 1942, Wasp headed north and touched at Argentia, Newfoundland, and Casco Bay, Maine, while operating in those northern climes. On 16 March, as part of Task Group (TG) 22.6, she headed back toward Norfolk. During the morning watch the next day, visibility lessened considerably, however, and, at 0550, Wasp’s bow plunged into Stack’s starboard side, punching a hole and completely flooding the destroyer’s number one fire room. Stack was detached and proceeded to the Philadelphia Navy Yard, where her damage was repaired.

Wasp, meanwhile, made port at Norfolk on the 21st without further incident. Shifting back to Casco Bay three days later, she sailed for the British Isles on 26 March 1942, with Task Force (TF) 39 under the command of Rear Adm. John W. Wilcox, Jr., in Washington (BB-56). That force was to reinforce the Home Fleet of the Royal Navy. While en route, however, Rear Adm. Wilcox was swept overboard from the battleship and drowned. Although hampered by poor visibility conditions, Wasp planes took part in the search. Wilcox’ body was spotted an hour later, face down in the raging seas, but it was not recovered.

Rear Adm. Robert C. Giffen, who flew his flag in Wichita, assumed command of TF-39. The U.S. ships were met by a force based around the light cruiser HMS Edinburgh on 3 April. Those ships escorted them to Scapa Flow in the Orkney Islands.

While the majority of TF 39 joined the British Home Fleet, being renumbered to TF 99 in the process, to cover convoys routed to North Russia, Wasp departed Scapa Flow on 9 April 1942, bound for the Clyde estuary and Greenock, Scotland. On the following day, the carrier steamed up the Clyde, past the John Brown Clydebank shipbuilding facilities. There, workers paused long enough from their labors to accord Wasp a tumultuous reception as she passed. Wasp’s impending mission was an important one, one upon which the fate of the island bastion of Malta hung. That key isle was then being pounded daily by German and Italian planes. The British, faced with the loss of air superiority over the island, requested the use of a carrier to transport planes that could wrest air superiority from the Axis aircraft. Wasp drew ferry duty once again.

Having landed her torpedo planes and dive bombers, Wasp loaded 47 Supermarine Spitfire Mk. V fighter planes at the King George V Dock, Glasgow, on 13 April, before she departed the Clyde estuary on the 14th. Her screen consisted of Force “W” of the Home Fleet — a group that included the battlecruiser HMS Renown and antiaircraft cruisers HMS Cairo and HMS Charbydis. Madison (DD-425) and Lang (DD-399) also served in Wasp’s screen.

Wasp and her consorts passed through the Straits of Gibraltar under cover of the pre-dawn darkness on 19 April 1942, avoiding the possibility of being discovered by Spanish or Axis agents. At 0400 on 20 April, Wasp spotted 11 Grumman F4F-4 Wildcat fighters on her deck and quickly launched them to form a combat air partol (CAP) over Force “W”. Meanwhile, the Spitfires were warming up their engines in the hangar deck spaces below. With the Wildcats patrolling overhead, the Spitfires were brought up singly on the after elevator, spotted for launch, and then given the go-ahead to take off. One by one, they roared down the deck and over the forward rounddown, until each Spitfire was aloft and winging toward Malta.

When the launch was complete, Wasp retired toward England, having safely delivered her charges. Unfortunately, those Spitfires, which flew in to augment the dwindling numbers of Gloster Gladiator and Hawker Hurricane fighters, were tracked by efficient Axis intelligence and their arrival pinpointed. The unfortunate Spitfires were decimated by heavy German air raids which caught many planes on the ground.

As a result, it looked as if the acute situation required a second ferry run to Malta. Accordingly, Prime Minister Winston Churchill, fearing that Malta would be “pounded to bits,” asked President Roosevelt to allow Wasp to have “another good sting.” Roosevelt responded in the affirmative. Rising to the occasion, Wasp loaded another contingent of Spitfire Vs and sailed for the Mediterranean on 3 May. Again, especially vigilant for submarines, Wasp proceeded unmolested. This time, the British aircraft carrier HMS Eagle accompanied Wasp; and she, too, carried a contingent ofSpitfires bound for Malta.

The two Allied flattops reached their launching points early on Saturday, 9 May 1942, with Wasp steaming in column ahead of Eagle at a distance of 1,000 yards. At 0630, Wasp commenced launching planes, 11 F4F-4s of VF-71 to serve as CAP over the task force. The first Spitfire roared down the deck at 0638, and 22 of the Spitfires took off with no difficulties. The twenty-third, however, piloted by Sergeant R. D. Sherrington, RCAF, lost power soon after takeoff and plunged into the sea. Both pilot and plane were lost.

Misfortune again seemed to dog the mission when Pilot Officer (PO) Jerrold A. Smith discovered his long-range tank to be defective. Wasp – which had launched the last British aircraft at 0738 – bent on full speed and recovered Smith’s Spitfire Vc, X-3 (BR-126) at 0743. The Spitfire came to a stop just 15 feet from the forward edge of the flight deck, making what one Wasp sailor observed to be a “one wire” landing. “The pilot landed with considerable skill,” Commodore C. S. Daniel, Royal Navy, Commodore Commanding Force “W” later reported, “and immediately asked permission to fit a new tank, take off and proceed independently, but this was not allowed.” Wasp launched Smith the following day [10 May] to fly to Gibraltar; he ultimately reached embattled Malta in X-3 on 18 May, flying in from Eagle.

With Operation Bowery having been completed – Wasp having launched 47 Spitfires and Eagle 17 – Wasp set sail for the British Isles while a German radio station broadcast the startling news that the U.S. carrier had been sunk! Most in the Allied camp knew better, however, and, on 11 May 1942, Prime Minister Churchill sent a witty message to the captain and ship’s company of Wasp:”Many thanks to you all for the timely help. Who said a Wasp couldn’t sting twice?” 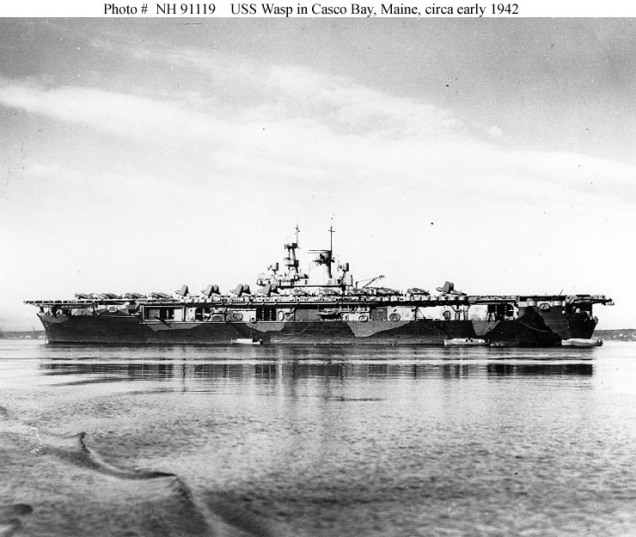 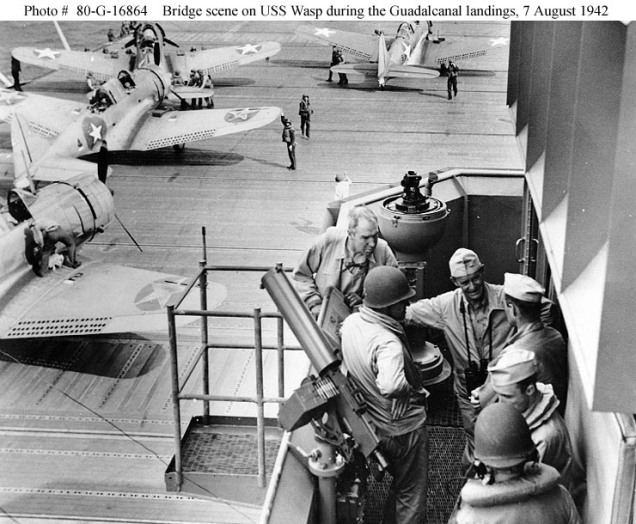 The plane fuselages were previously filed, a step I forgot the first time when I painted the Enterprise planes.

Painting a base coat with intermediate blue acrylic paint… 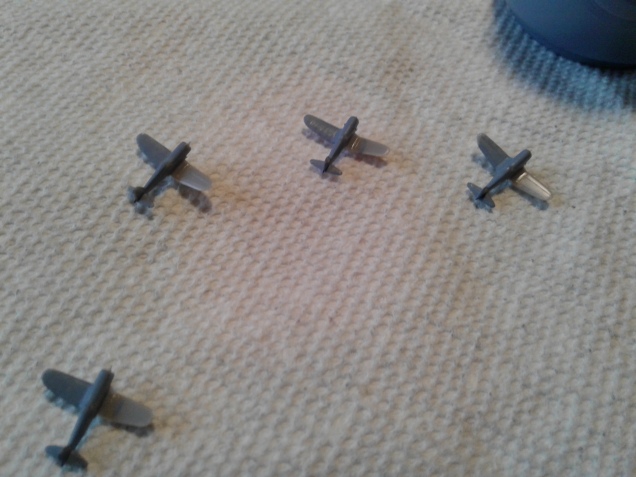 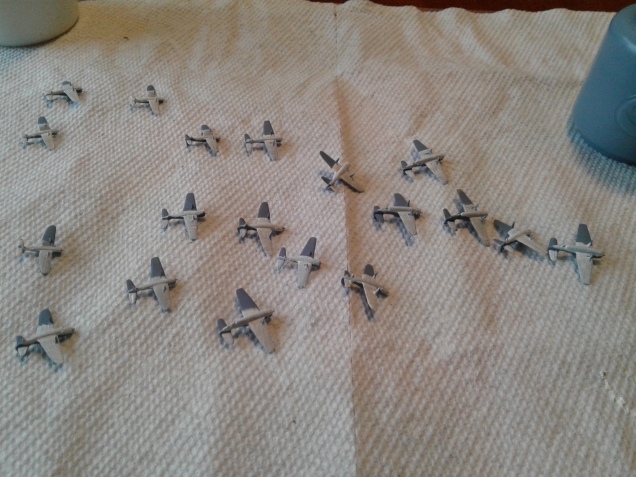 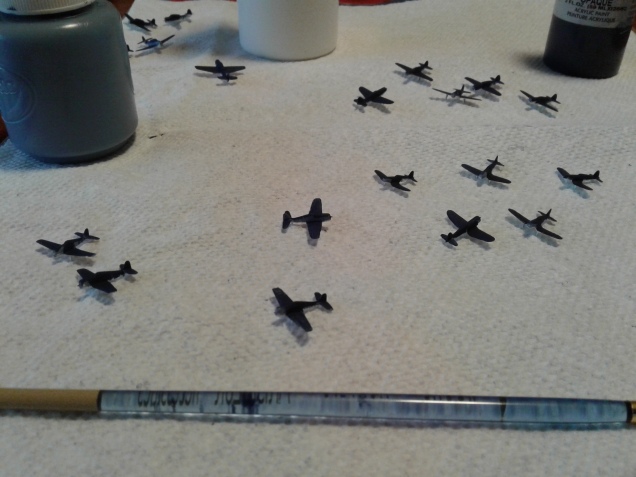 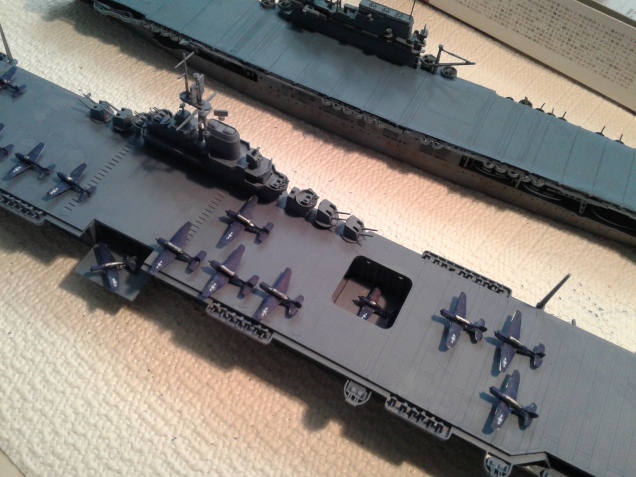 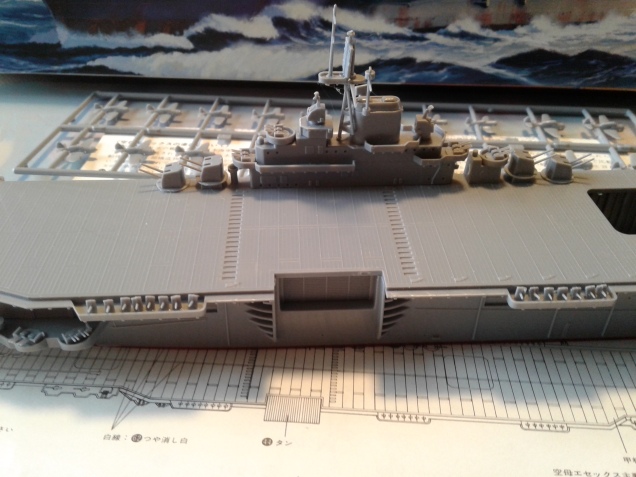 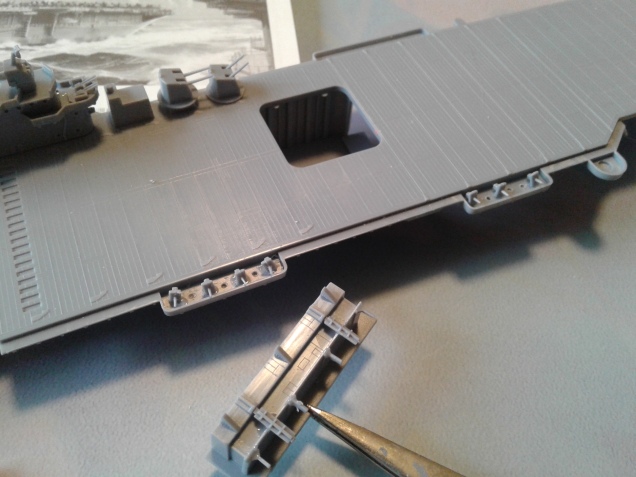 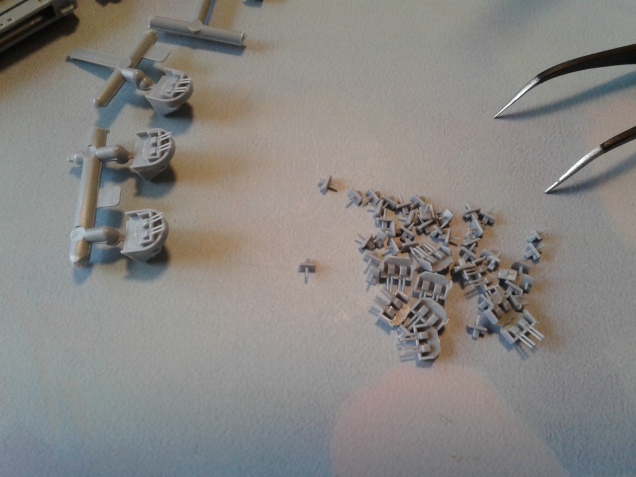 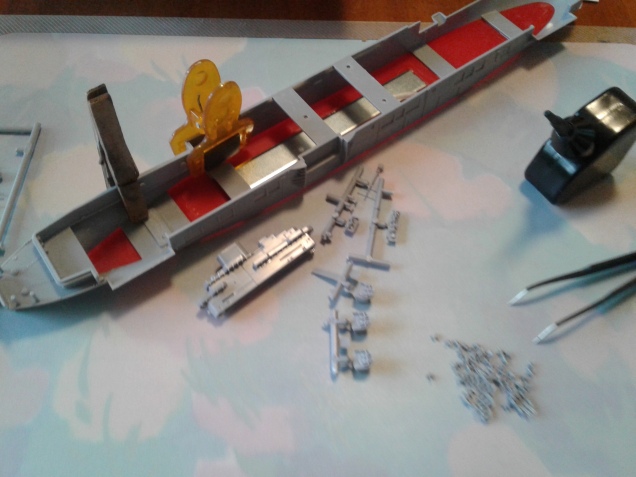 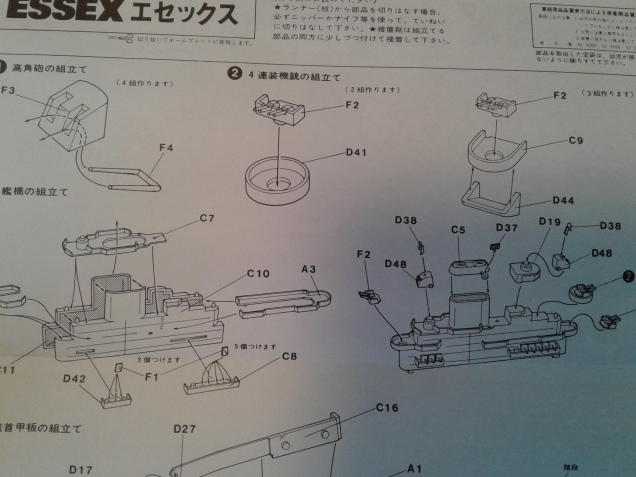 I had some free time… 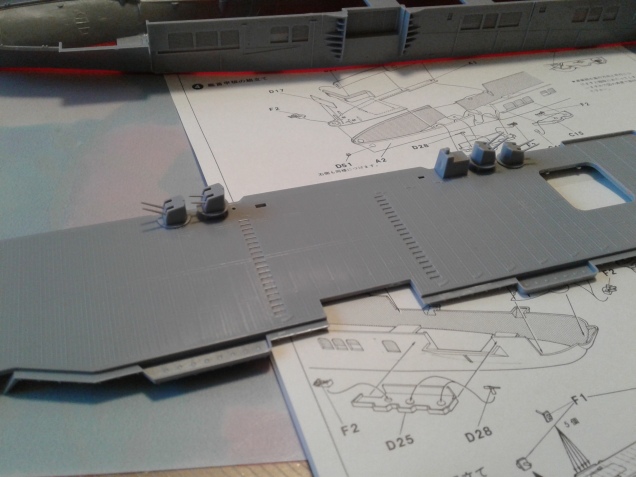 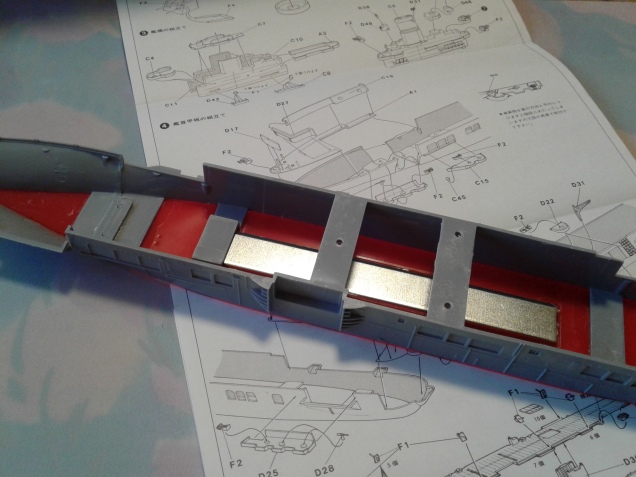 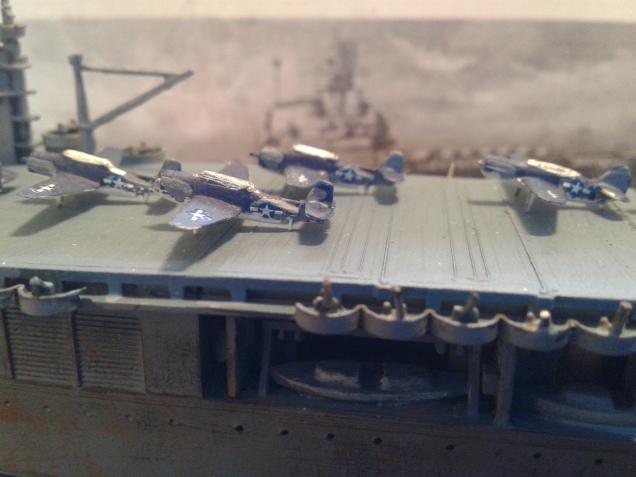 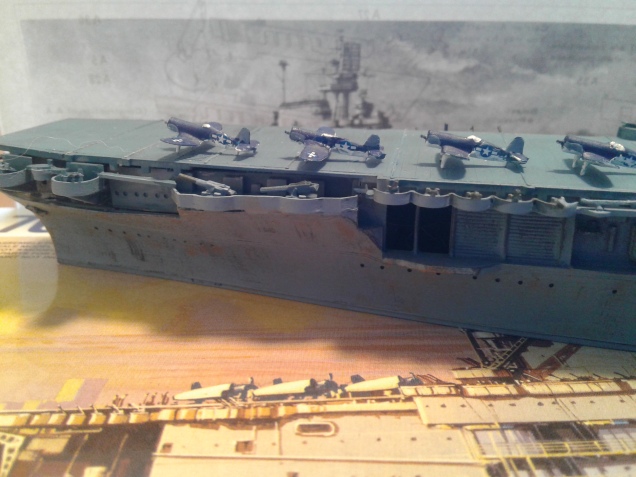 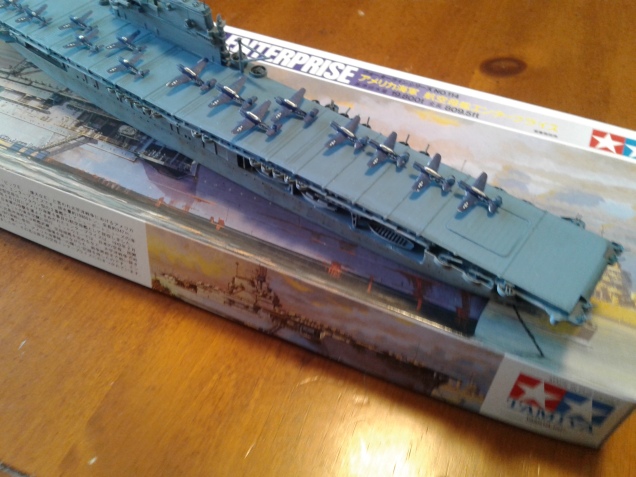 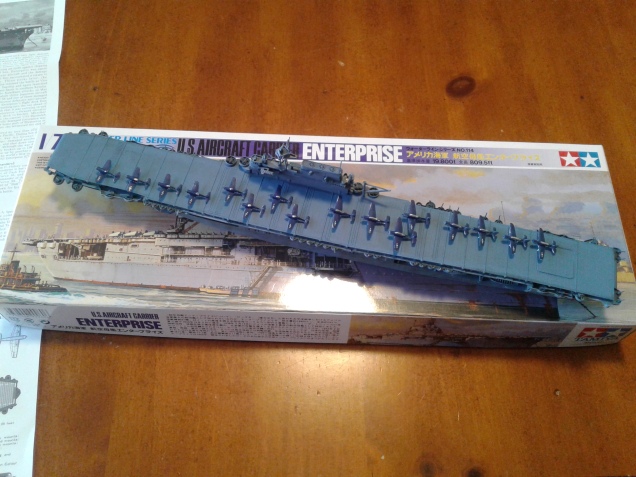